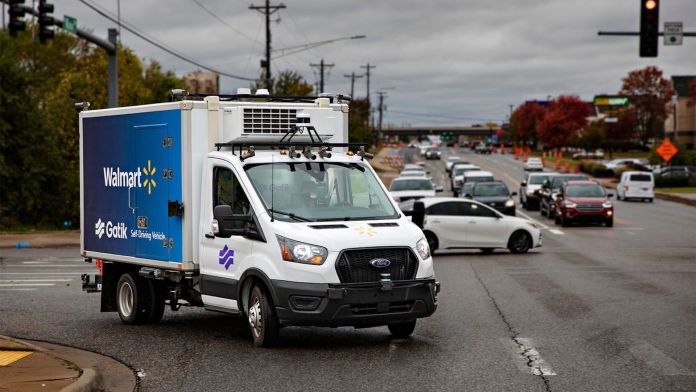 U.S. retail giant Walmart has teamed up with five self-driving startups, allowing robots to take over in Arkansas.

The first on the list is Gatik, which claims to be the first profitable, driverless cargo delivery company. Gatik specializes in transporting cargo using specific routes; they spent two years testing the Bentonville loop before removing the human chaperone. Their rigs take the most conservative route to avoid danger rather than the shortest route. For example, they would choose to take three right turns instead of an unprotected left.

“We truly believe in solving the middle-mile delivery problem, not the autonomy problem,” says Gautam Narang, Chief Executive Officer and Co-founder of Gatik. “We can take unprotected lefts, we can do multiple lane changes, but it’s all about risk and exposure.”

Driverless cargo will be the holy grail of retail; without passengers needing to be transported to-and-fro, demand is much easier to manage and spread out throughout the day. This has been further substantiated by Guidehouse research analyst Sam Abuelsamid who stated that “the operating economics are much better suited to getting this stuff out there sooner.”

Apart from Gatik, Walmart has partnered with Cruise LLC, the autonomous driving arm of General Motors Co. Just last week, its Co-founder and Chief Technology Officer Kyle Vogt took one of their test vehicles on a driverless ride around San Francisco, California. Meanwhile, Walmart is also working with Nuro, Waymo, and Argo AI, all of which are known for their automated driving systems as well.