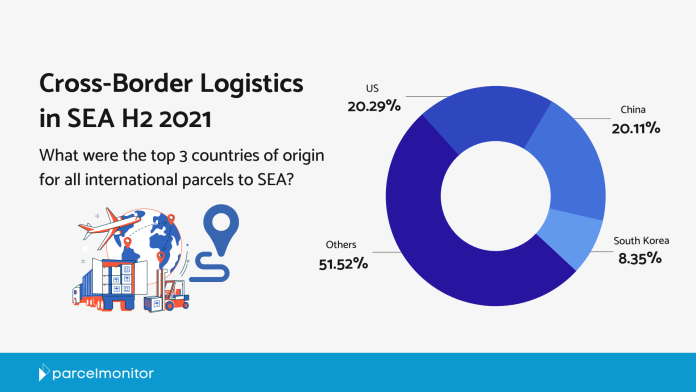 11 countries, 7 major languages, and more than 620 million people. The state of cross-border e-commerce in Southeast Asia is growing rapidly.

Home to about 8.58% of the world’s population, Southeast Asia (SEA) is one of the fastest-growing e-commerce markets in the world. In fact, it has been earmarked for intensive growth in its digital economy, which is predicted to reach the US$1 trillion mark by 2030. Looking at the pace at which cross-border trade is flourishing in the region, it might even overtake the West’s digital economy in years to come.

With this in mind, our team took a closer look at how cross-border e-commerce in Southeast Asia has developed over the last year. Our analysis below features valuable growth data as well as some interesting insights and commentaries from some of the industry experts who will be speaking at the upcoming eTail Asia event. Let’s take a look!

The Majority of Outbound Parcels From SEA Are Sent to the United States, Australia and the United Kingdom

In 2021, the United States, Australia and the United Kingdom were the top 3 destinations for e-commerce exports from SEA. More specifically speaking, about 32.8% of the international shipments from the region were shipped to American customers, while the other 12% and 6.1% belonged to those in Australia and the UK respectively. Indeed, SEA is a key source of supply for a diverse range of product categories, one of them being jewelry such as pearls and precious stones.

Owing to the existence of e-commerce-enablers like Shopify and Amazon, SEA merchants can now set up online stores easily to sell their goods to consumers in other regions. Shopify, for instance, strives to alleviate difficulties merchants face with regard to cross-border e-commerce by handling tasks such as currency conversion, localization and even SEO.

Most International Parcels Entering SEA Originate From the US, China and South Korea

Based on our data, the majority of inbound parcels in SEA can be traced back to the United States, China and South Korea. In view of the region’s dependence on the US for luxury items and branded goods, it only makes sense that it would be one of the top countries of origin. As for China, the pandemic has expanded the extensive margins of its exports to SEA, in line with the substantial surge in demand for medical supplies and capital goods. Furthermore, recent proliferation of online marketplaces like Shein and Taobao, combined with inexpensive shipping rates, have made it all the more easier for SEA shoppers to buy from China.

Meanwhile, cross-border e-commerce is a key component of the consumer market in Korea, a country where a whopping 99.5% of households have access to some form of Internet. According to Gerald Hoe, Head of Global Marketplace at Korea’s leading marketplace Coupang, there is a growing demand for a wide selection of quality international items in Korea. As a matter of fact, Korea’s cross-border online sales have increased from $2B in 2017 to $4.5 billion in 2022, representing an annual growth rate of 23%.

“Given the country’s highly wired population, e-tail continues to be a dominant form of shopping, with online transaction values up 13.7% in February 2022 compared to the previous year. There is no doubt that e-Commerce has become a vital part of the day-to-day lives of many customers across the world and Coupang will continue to work hard to shape the future of online shopping and help bring the world to Korea,” stated Gerald.

Singapore Had the Highest Number of Exported Parcels in SEA

A small nation with no natural resources, Singapore has been (and still is) one of the most trade-dependent economies globally. Today, Singapore derives most of its revenue from foreign trade, with machinery and equipment accounting for 43% of exports. Other exports include petroleum (19%), chemical products (13%), and miscellaneous manufactured parts (8%).

From a continental perspective, Singapore exported 71% of its goods to other Asian countries, while only 11.4% and 19.6% went to North American and European buyers, respectively. Our data also shows that Singapore generated the highest volume of exported parcels in the SEA region, with a 27.3% increase in the number YoY in H2 2021. Furthermore, more Singaporeans appear to be opting for domestic goods over imported ones, considering how the former segment has grown by 27.6%, while the latter remained relatively stable over the past year.

What’s Next in Cross-Border E-Commerce?

As the pandemic-induced e-commerce growth stabilizes and as customers adapt to the “new normal”, we are excited to see what’s next for the SEA cross-border e-commerce landscape in 2022 and beyond.

eTail Asia is the most up-to-date, in-depth and comprehensive e-commerce event in Asia for senior Retail, E-Commerce & Digital Marketing innovators. Happening 7-9 June at Resorts World Convention Centre Singapore, the annual event aims to share new industry innovations, provide tips to help businesses increase their profits, and enable professionals to develop new connections within the industry. Book now and get an exclusive 15% off!