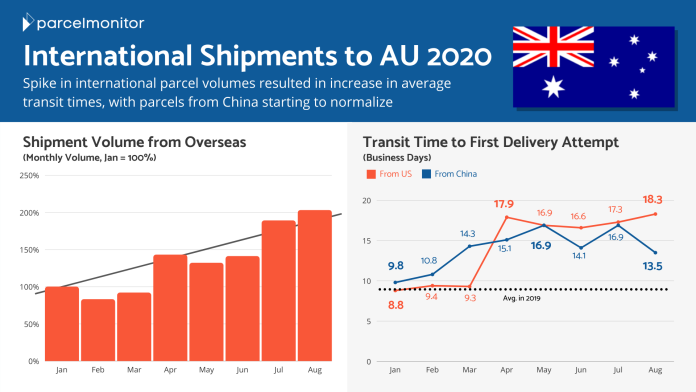 In our previous study on the effects of lockdown measures on Australia’s domestic shipments,  transit time to the first delivery attempt for domestic parcels increased from 2.3 days to 3.0 days. (March to April 2020). Building on these findings, we looked at the effects of COVID-19 on Australia’s international shipments, which mostly came from the US and China in 2019. This week’s study revolves around international shipment volumes and the impact of COVID-19 on transit times for parcels from the US and China. Which country’s parcels do you think experienced a longer transit time? Here’s what we found from our data:

Our data shows that international shipments to Australia dipped from February to March. This corresponds with the timeframe when Australia announced that they will go on lockdown and shut its international borders. The lockdown drove over 200,000 new shoppers to e-commerce stores.  From April, the volume of international shipments picked up; peaking in August with a 203% increase from January. The latest statistics on the global online market in Australia estimates the market to hit a 21.5% YoY growth rate  And a value of USD $3.64 trillion by 2024.

While transit times dropped slightly in the months through May, June, and July, transit times rose again in August, peaking at 18.3 days.  Logistics carriers in the US faced some challenges following the overwhelming surge in e-commerce demand from the shift towards online shopping. In our previous study on the impact of COVID-19 in the US, we found that the average transit time for parcels going out of the US has increased by 51.1% from January to April while the international shipments grew by 132% in the same period. Carriers seemed to struggle domestically, where the average transit time for domestic shipments grew 41.2% from January to April.