How Peak Season Affected E-Commerce Deliveries in Germany and the UK? 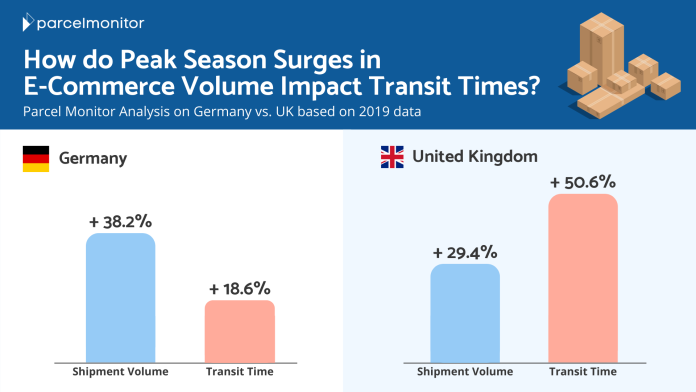 Economically, the UK is the sixth-largest economy in the world with $2.83 trillion GDP and ranked as Europe’s biggest B2C e-commerce market in 2019.

In comparison, Germany is known for holding the largest and strongest economy in Europe. On a global scale, it is the fourth-largest economy with $4 trillion GDP and ranked as Europe’s third-biggest online market in 2019.

With that in mind, we did a comparison study between these economic powerhouses to examine how logistics players in these countries fared against the huge e-commerce orders during peak season.

For this study, we looked at e-commerce volumes and average transit times during the busy holiday season in December 2019; comparing these against the averages from June to November 2019. Here’s what we noticed:

During peak season in 2019, e-commerce volumes in the UK increased by 29.4% while average transit times increased by 50.6%. Indeed, retail sales in the UK peaked during the holiday season; clocking in a revenue of 58 billion euros in December 2019.

Delivery companies in the UK had to ramp up their fleet of drivers and vehicles to prepare themselves for the surge in e-commerce orders; 2018 saw around 30 million orders placed on Black Friday alone – 21 million of which were delivered to home addresses. Logistics carrier UPS also announced plans to hire additional 100,000 seasonal employees globally to manage the volume. In fact, logistics companies were struggling with manpower shortage issues then; the  2019 Logistics report by FTA, reported a 15% vacancies on delivery drivers in the UK.

Germany saw a 17% increase in transit times during peak season

In comparison, Germany saw a slightly larger increase in e-commerce volumes of 38.2% during the peak season. A poll conducted by Ernst & Young found that Germans were expecting to spend more than $20 billion on presents during the holiday season. Despite the surge in e-commerce orders, average transit times in Germany saw just a slight increase of 18.6%.

Similar to the UK, transit times in Germany increased along with higher e-commerce volumes during peak season. However, the extent of the impact on logistics performance (measured in terms of transit times) appeared to be much lower in Germany as compared to the UK.

Our findings seem to suggest that logistics players in Germany could handle the surge in e-commerce shipments better than logistics players in the UK. Based on the Logistics Performance Index (LPI) by the World Bank, Germany was ranked first for its overall logistics performance with a score of 4.20. In contrast, the UK ranked ninth place on the global rankings with a score of 3.99; behind its European counterparts Sweden, Belgium, Austra, Netherlands, and Denmark.

Based on these findings, the peak season affected e-commerce logistics players in both countries. Against the backdrop of the ongoing global pandemic, we can expect online sales to surge even further during peak season this year. Indeed, US carriers have begun taking measures to cushion the impact of peak season.