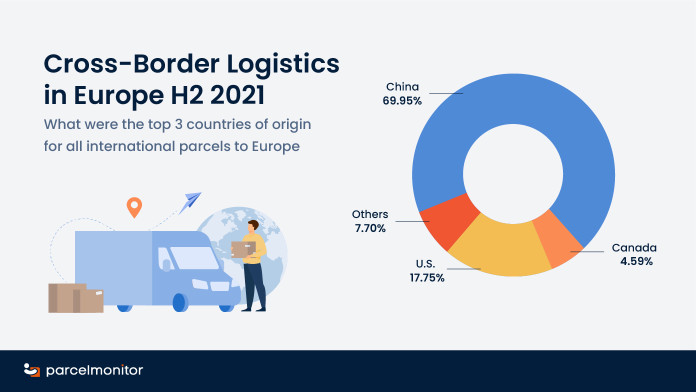 Following the analysis of cross-border e-commerce in Australia, Southeast Asia, and the United States, it is now time for us to take a closer look at the European market.

In 2021, Europe’s cross-border e-commerce market was valued at €12,710m, with Germany representing approximately 28.5% of the total market share. A 2021 Eurostat survey also revealed that 32% of the region’s shoppers have made online purchases from other EU nations over the year. This is not surprising given that a growing number of domestic e-commerce players have been seeking territorial expansion as a means of achieving growth.

2021 was no doubt an impressive year for cross-border e-commerce in Europe, but how have things changed since then? How does the growth of domestic parcels compare to that of international ones? Let’s find out!

We saw an increase in international packages coming into most of Europe during the first quarter of this year. The Netherlands in particular experienced the biggest jump in imports, as evidenced by the 16.5% increase in Q1 2022 YoY. As for Germany and Belgium, the inbound parcels only grew by 6.72% and 2.41% over the same period.

In part due to the strong domestic e-commerce market dominated by players such as Bol.com, the Dutch were not as inclined to shop across borders for the longest time. Compared to other European countries, the Netherlands was also slow to the uptake of online marketplaces such as Amazon and Zalando. Amazon, for instance, only launched an official Dutch platform in early 2020, following a long process of baby steps that included translating every product page from German into Dutch. It was thus surprising to see that the Netherlands had the strongest growth in imported parcels within the region, despite its late introduction to the global cross-border e-commerce market.

Domestic Parcels Saw a Higher Growth Than International Ones in Belgium, France and the United Kingdom

Be in the know of the hottest events