H1 2021: E-Commerce Logistics in the Netherlands 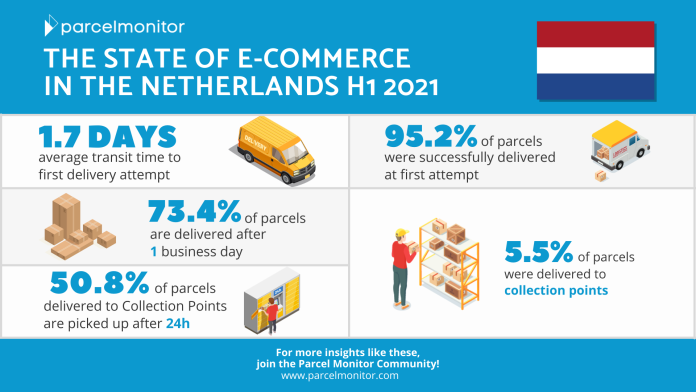 Online shopping has gained popularity across the globe in recent years, with the Netherlands being no exception. In fact, the Netherlands is now home to the 17th largest e-commerce market in the world, placing it ahead of Turkey according to eCommerce DB. Moreover, the country is also known for its trading spirit, something that sets it apart from its neighboring countries. While most European e-commerce markets are dominated by foreign retailers, the one in the Netherlands is mostly made up of local players.

The trusted source of e-commerce logistics data insights
Sign up for free now!

As part of our state of e-commerce series last year, we covered the Netherlands’ figures for H2 2020. How has the country’s state of e-commerce evolved since then? Are home deliveries still the preferred method of delivery amongst the Dutch? Let’s find out!

Deliveries in the Netherlands Had an Average Transit Time of 1.7 Days

Deliveries in the Netherlands took slightly longer than those in neighboring countries during the first half of 2021. In contrast to Belgium (1.1 days) and Luxembourg (1.2 days), Netherlands’ domestic parcels needed an average of 1.7 days to reach their final destinations. With reference to our past data, we observed an increase in the average transit times of Dutch packages in the last two years, from 1.4 days in H2 2020 to 1.7 days in H1 2021.

This could possibly be due to a surge in parcel volumes throughout the Netherlands in 2021; PostNL, for instance, estimated around 384 million deliveries last year – which was an increase of about 14% from the year before. On top of that, the country was also dealing with a post-lockdown manpower shortage, something that greatly affected the logistics industry. According to Dominique Hermans, Chief Executive Officer of the leading employment agency Randstad, labor shortages in the Netherlands were closely associated with individuals leaving the employment market to start their own businesses and fewer university graduates entering the workforce.

95.2% of Domestic Parcels in the Netherlands Were Successfully Delivered on the First Attempt

First-time delivery success rates are so crucial for those in retail and e-commerce as they can help enhance the customer experience, which in turn leads to greater customer satisfaction and more importantly, higher customer retention. We saw a marginal difference of 0.2% in the delivery success rates of domestic parcels in the Netherlands between H2 2020 (95%) and H1 2021 (95.2%).

On 23 March 2021, the Dutch government announced an extension of the lockdown measures until 20 April 2021, despite a decrease in the number of cases within the country. While the peak of the third wave may have passed, the authorities believed that there was still not enough of a decline in the infection rates to ease the restrictions. Some of the measures imposed during this period include a curfew from 10pm to 4.30am, limited social interactions, work-from-home arrangements and self-quarantine requirements. With the majority of the Dutch population staying at home, it makes sense that the first-attempt delivery success rate of parcels was as high as 95.2% in H1 2021.

5.5% of Dutch Packages Were Delivered to Collection Points

In line with the growing popularity of collection points around the world, PostNL has increased the number of parcel pick-up and drop-off (PUDO) locations in recent years. The company is looking to invest approximately 450 million euros to set up 1500 PUDO points by 2024, allowing more customers to send off and receive their parcels at their own convenience. Having said that, nearly 4 in 5 Dutch consumers still preferred to have their online orders delivered to their doorsteps as of October 2020. This could perhaps explain the relatively lower usage of collection points in the Netherlands (5.5%) as compared to other European countries like Belgium (9.9%).

While the Dutch are not as receptive to unconventional delivery methods as most Europeans, we are looking forward to witnessing a continued expansion of their e-commerce market in the years to come. Stay tuned for our next edition to find out what’s new in the Netherlands’ e-commerce market in H2 2021 and beyond!