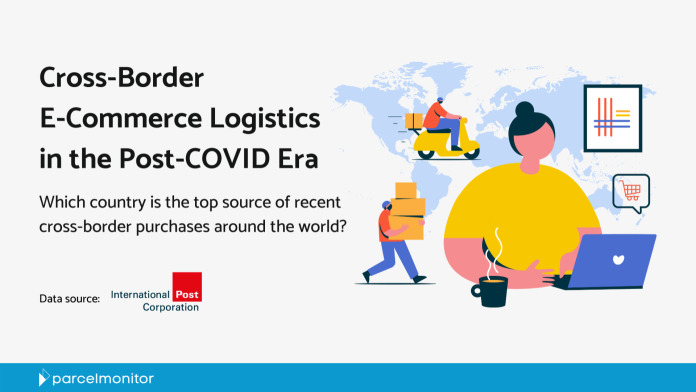 The International Post Corporation (IPC)’s Cross-Border E-Commerce Shopper Survey 2021 offers a detailed overview of the purchasing trends and driving forces that are affecting cross-border e-commerce around the world. As part of its latest publication, IPC included questions about consumers’ buying habits and shopping frequency, which would allow postal operators to make informed decisions with regard to their products and service specifications.

IPC surveyed 33,179 online shoppers across 40 countries, all of whom made cross-border purchases in 2021. Among them, 25 countries have participated in previous rounds of research, thus providing the IPC team with a wealth of trend data to work with.

Read on to find out some of our key findings below:

There is no denying that COVID-19 has exerted a significant influence on consumers’ shopping habits. Due to the closure of physical stores during the lockdown period, there was a considerable increase in customers purchasing online in 2020. More specifically speaking, the percentage of the customers who shop online at least once a week rose by 5% (from 17% in 2019 to 22% in 2020). This figure remained constant in 2021, while the number of consumers shopping online once a month saw a slight decrease to 29% (from 32% in 2019 & 30% in 2020).

When asked if they had the intention to modify their buying habits in the future, 27% of the surveyed respondents revealed their plans to buy more from domestic retailers. Meanwhile, a notable portion of them said that they would buy less from certain foreign countries, namely the US, China and the UK. 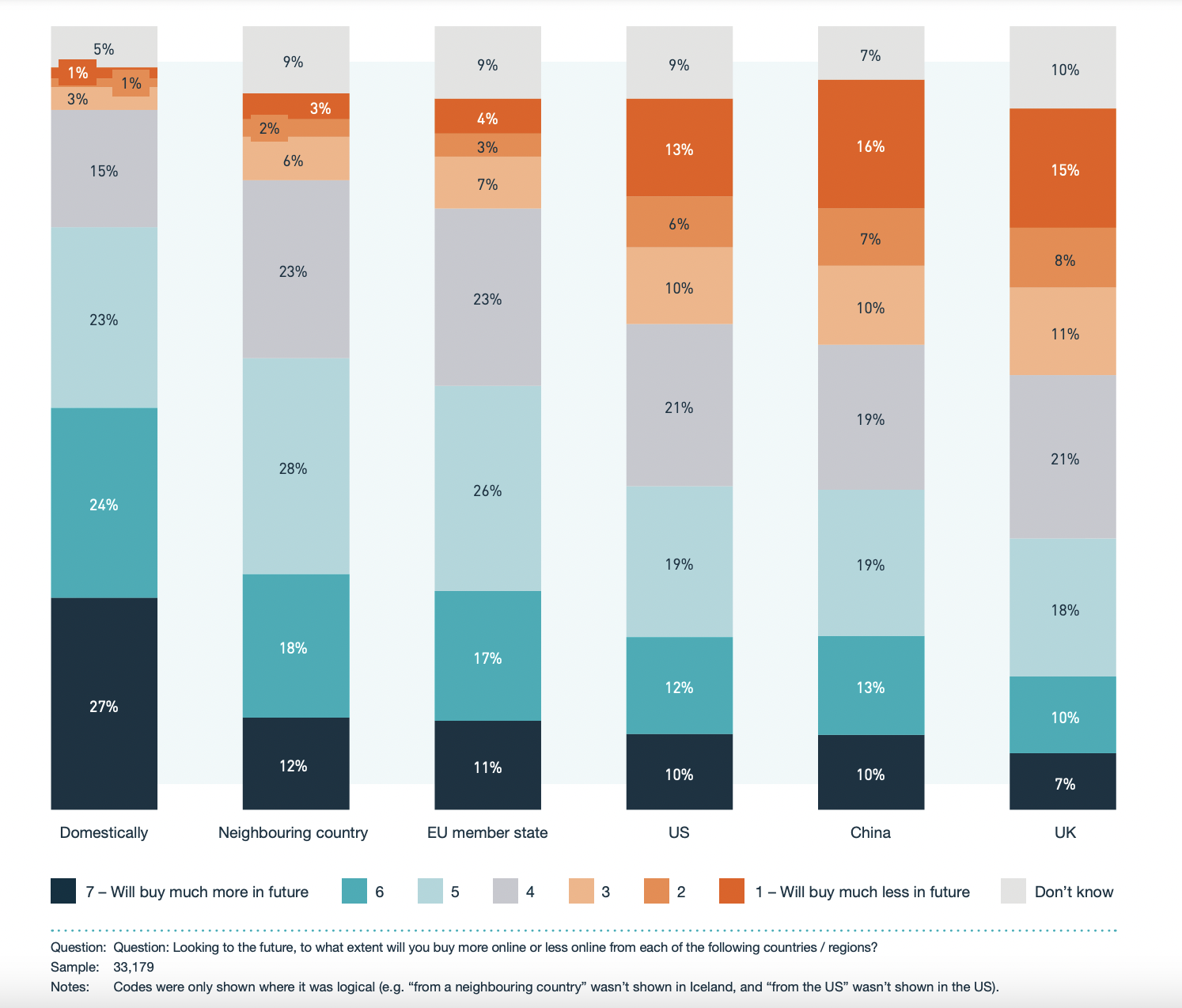 #2: China Was the Major Source of Recent Cross-Border Purchases Across Regions

China was the leading country in the cross-border e-commerce industry with 35% of the participants saying that most of their recent online products were purchased from there. The US ranked second with 14%, followed by Germany and the UK with 12% and 8% respectively.  According to the survey, Russia was the nation that bought from China the most, with 82% of Russian cross-border purchases originating from China. Eastern Europe and Latin American consumers also purchased the most from China. 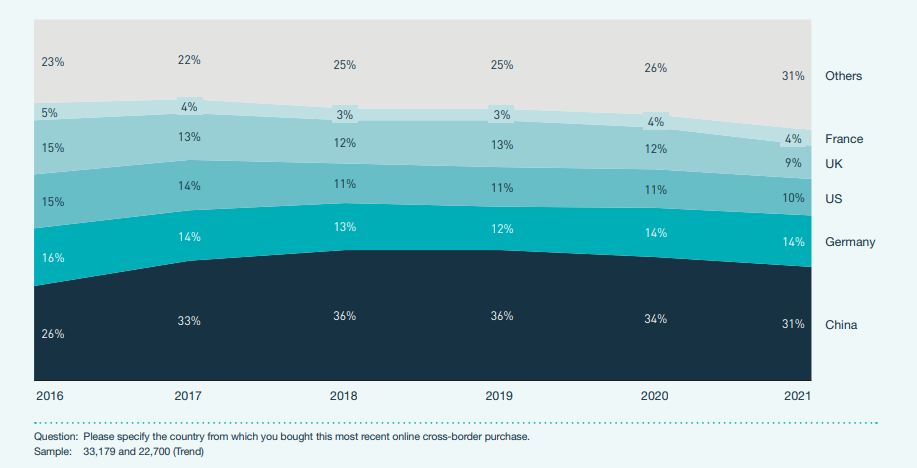 Despite the downwards tendency of two of the biggest exporters in the world, Germany and the US both kept their proportions from the previous years. However, it was notable that the percentage from the ‘Other countries’ group climbed by 5%. This was clear evidence that in 2021, “Big 4” e-Commerce markets were no longer popular with consumers in the world. Instead, consumers were more keen to make cross-border purchases from a nearby nations instead.

#3: Amazon Is the Leading Cross-Border E-tailer Around the World

Based on IPC data, Amazon was the biggest e-retailer around the world with 26% of recent cross-border purchases made on this platform. AliExpress ranked second with 19% while eBay and Wish shared the third and the fourth position with 10% and 7% respectively.

In addition, we can see from the study that in Luxembourg, Amazon was actually the dominant retailer with 59% of the cross-border purchases. Some other nations where shoppers also really loved Amazon were Austria (54%), India (51%), Canada (48 %), Italy, and Mexico (both 46%).

According to the research, from 2019 to 2021, the market share of both Wish and eBay decreased significantly. This might be because of the emergence and expansion of several new e-retailers. For instance, Shein – a Chinese clothing e-retailer only accounted for 0% in 2019 but climbed to 3% in 2021. Despite the fluctuation of many e-retailers on the market, Amazon still continued to bloom and grew in various nations. 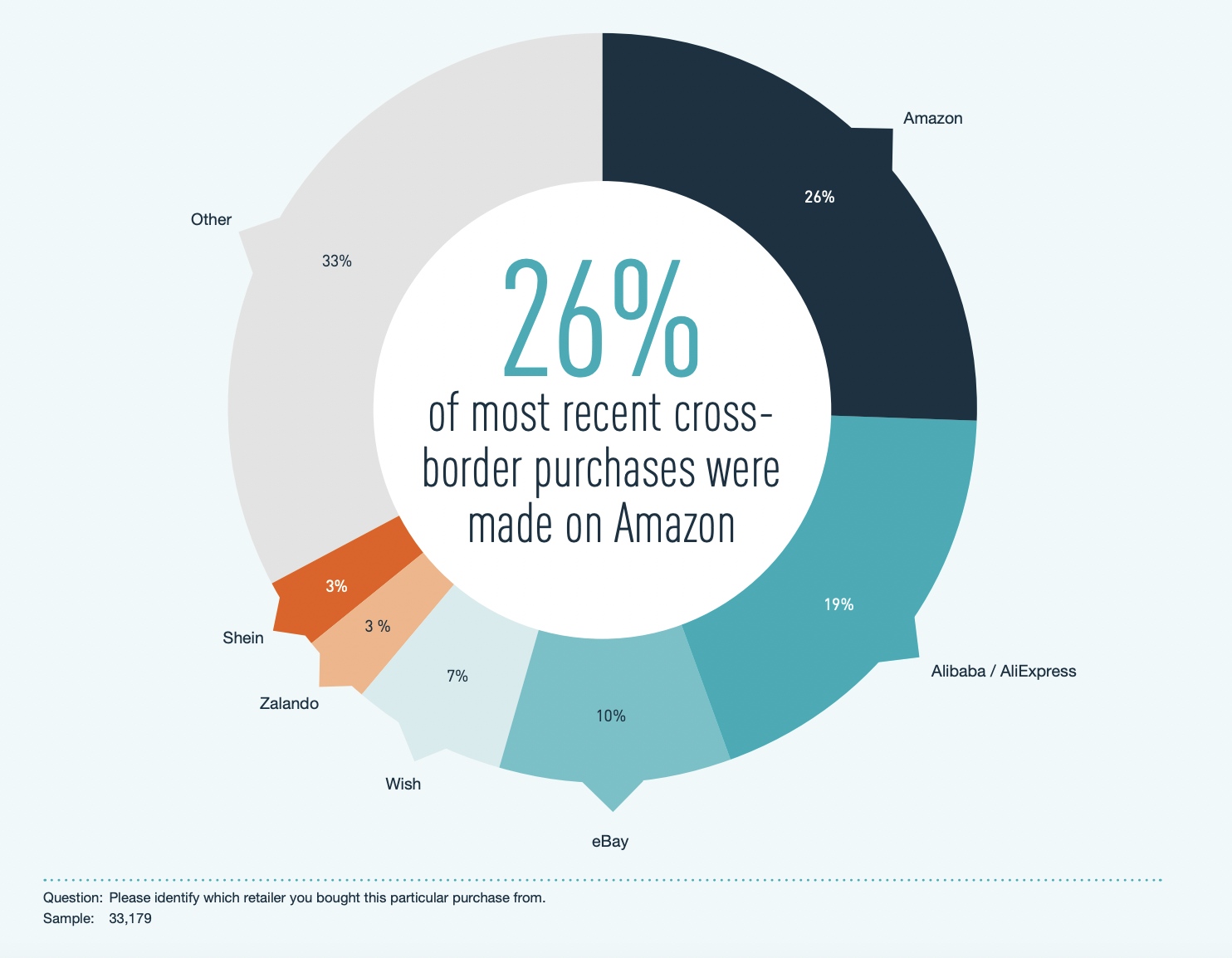 Within over 10 categories included in the survey, the data clearly showed that consumers often purchased clothing, footwear & apparel online as this is the leading product category with 34%  in 2021. Electronics and Health & beauty were the next most purchased products with 22% and 19% respectively. 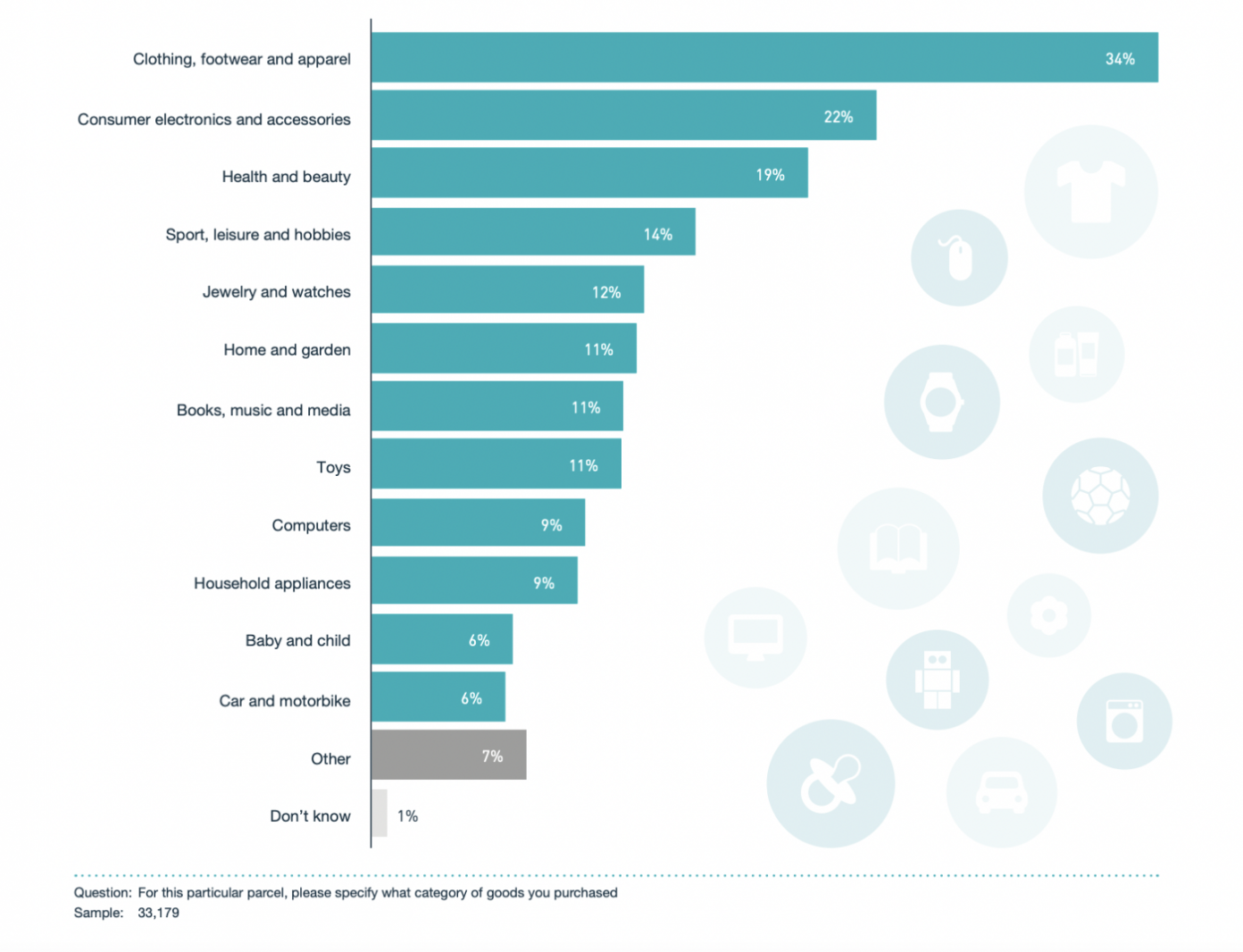 Delivery time is also one of the most important factors when it comes to cross-border purchases. In IPC’s survey, participants were asked about how long it took for their order to arrive from the time they bought the products to the day they received them. Almost a quarter of respondents answered that the transit time was 15 days or more. As expected, the orders from neighboring nations were delivered with the shortest lead time, while the ones from China were the slowest.

According to the survey, cross-border consumers preferred receiving products in 1-3 days. In other words, customers purchased more from neighboring countries because of the short transit time and less from China. In 2020, the COVID-19 outbreak had led to delivery delays in many nations. But in 2021, the percentage of products that took 30 days to be delivered dropped considerably, which represents the end of COVID-19’s influence on cross-border parcel delivery.

For more insights, check out the full report here!

International Post Corporation (IPC) is the leading service provider in the global postal industry that provides leadership by driving service quality, interoperability, and business-critical intelligence to support posts in defending existing business and expanding into new growth areas. Throughout the COVID-19 crisis, IPC has positioned itself as a crucial coordination platform between posts worldwide and put in place operational solutions to ensure the continuity of cross-border mail flows.