The Brexit Effect: How Brexit Affected E-Commerce Logistics in the UK 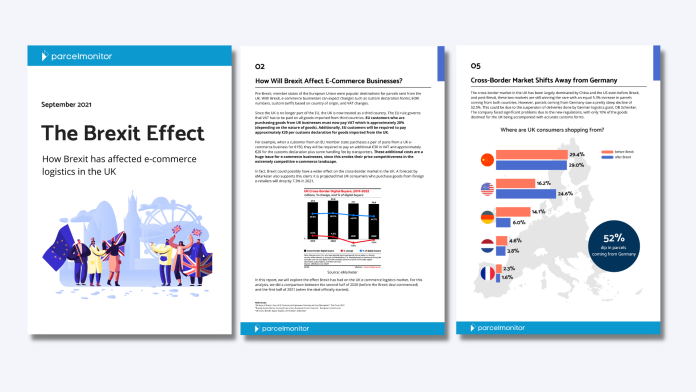 From 1 January 2021, the Brexit had taken place officially. Things had changed for UK e-commerce businesses and consumers. Since the UK is no longer part of the EU, there are stricter regulations around customs declaration, filling in declaration forms, and providing more documentation at the borders.

Observing a shift in e-commerce and consumer behavior in the UK after Brexit, we looked into the impact it had on the UK’s e-commerce logistics in various areas: such as shipment volume, delivery time, and cross-border market.

To view our full analysis of how Brexit has affected e-commerce logistics in the UK, download your FREE report below (exclusive to Parcel Monitor members).

Here are some key highlights from our analysis:

The trend to shop from local businesses has been growing since the pandemic onset. However, it seems that the behavior is further strengthened post-Brexit. With longer delivery times and additional VAT fees when purchasing from EU retailers, British consumers seem to favor shopping locally even more.

There was only little difference in transit time between domestic purchases and purchases coming from the EU countries pre-Brexit. However, the average delivery time for parcels coming from EU member states saw an incremental rise post-Brexit.

With the new border regulations kicking in after Brexit, major logistics players like DB Schenker and DPD had to halt their UK shipments. A lot of parcels were reported to be returned due to missing information in the paperwork, which is reportedly a manual process.

UK Cross-Border Market Dominated by China and the US

The cross-border market in the UK has been largely dominated by China and the US even before Brexit. These two markets are still winning the race with a slight increase in parcels coming from both countries after Brexit.

The second runner-up in the UK’s cross-border market, Germany, saw a pretty steep decline in parcels. The delivery suspension done by DB Schenker could be the major factor for this. The company faced significant problems with the new regulations, with only 10% of the goods destined for the UK is accompanied by accurate customs forms.