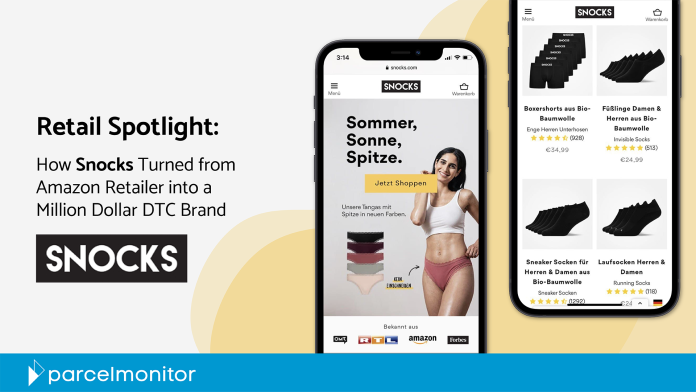 Ever searched for ‘socken’ or ‘socks’ on Amazon? Chances are, you would have heard of the brand Snocks, one of Amazon’s biggest players for some of the bestselling black sneaker socks. The brand also sells hoodies, boxers, and sneaker accessories.

Founded by cousins Johannes Kliesch and Felix Bauer in August 2016 when they were banking students, Snocks started out on Amazon with a simple business model of selling socks. What became of the cousins’ initial 4,000 euro investment in August 2016 quickly turned into revenues of 10,000 euros by September. Since then, Snocks has only been flourishing even without having external investors on board, with the company estimated to have hit sales of over 10 million euros just last year.

So, how did two cousins start a million-dollar business selling socks?

Snocks is Amazon’s Choice in the search results for “sneaker socks” on Amazon.de

Despite losing momentum at the end of 2016, business quickly picked up again in 2017, leading Kliesch and Bauer to take out a loan to further invest in the business’ internationalisation and expand their product range. By end 2017, they saw revenues of at least 400,000 euros and went all in into growing Snocks.

Through self-learning, the Snocks co-founders have a sharp understanding of how to game the Amazon search rankings which have been a significant driver of their success. Half of their initial 4,000 euros investment went into product ads on Amazon that led to a 500% increase in their return on investment (ROI) for their ad spend.

Additionally, thanks to the users’ cheap purchases of their early products, Snocks saw their sales growing steadily which in turn improved their rankings on Amazon’s search engine. Even bestseller labels were beginning to get tagged onto their products, further boosting their organic growth.

Indeed, Snocks’ rapid growth did not go unnoticed by Amazon. The pair was quickly approached by the e-commerce giant to be the face of the  campaign which gave them a huge platform to spearhead their growth internationally. On the taxes side, the company was also using Amazon tax exempt program to raise their profit margins.

On the logistics side, the cousins were enthusiastic about starting up Snocks after learning about Amazon’s ‘Fulfillment by Amazon’ (FBA) scheme. From handling all logistical tasks such as warehousing, shipment and returns, and customer service, FBA afforded Snocks the feasibility to launch their business — which was especially helpful in preventing Kliesch’s mother’s house from becoming filled with cardboard boxes again.

Growing Outside of Amazon

Despite the success on Amazon, Snocks has found themselves venturing into their own independent online store which now accounts for up to 60% of its total sales.

Snocks expanded beyond Amazon by opening their own Shopify store. The company is currently working with Atrikom, a third-party fulfillment company. This allowed them to not only build a more efficient e-commerce warehouse, doubling the number of orders processed, but also gain more control over the fulfillment process to provide a better customer experience.

Besides establishing their independent storefront and logistics network, what also helped to power their six-figure sales outside of Amazon was how Snocks employed cutting-edge social media marketing in a bid to “emotionalise” their socks and boxer shorts.

After Christmas 2017, Kliesch and Bauer started a massive Facebook and Instagram ad campaign that sent their sales soaring through the roof. They teamed up with performance marketing specialists to rapidly grow their sales by 470% through innovative social media marketing strategies. They promoted special customer bundles to reduce the cost per purchase and were able to scale monthly sales directed from Facebook and Instagram, to the point where paid ads on social media generated 250,000 customers for their online shop and accounted for over 75% of sales!

From boxers and socks to… media?

Beyond boxers and socks, what else is in store for the future?

In the pipeline are plans to build a media company by thinking of ways in which Snocks can work successfully on various platforms. This, as Kliesch shares, is how they aim to make Snocks synonymous with socks or boxer shorts at the top of people’s minds.

Indeed, the company aims to reposition its brand by capitalizing on the hottest video format at the moment: the 60-second, TikTok style content. By adopting this trend in its early stages, Snocks is gearing up to further strengthen its branding and enhance its customer loyalty. And by the looks of it so far, the Snocks TikTok has gained an impressive foothold in this area, boasting over 123,000 followers and garnering 2.4 million likes.

All things considered, it can definitely be said that this company will continue to rock the Snocks off the e-commerce and direct-to-consumer world.