The State of E-Commerce in Germany 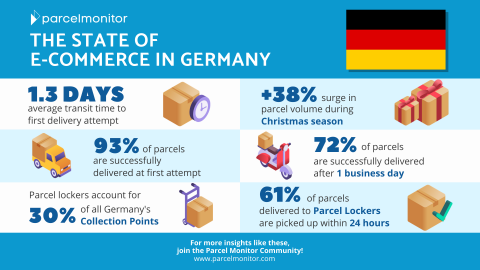 Based on data from the IMF, Germany has the fourth-largest economy in the world. The country is also known for having the strongest economy in Europe and was ranked as the third-biggest online market in 2019.

This week we took a deeper dive into the state of e-commerce in Germany, analyzing data from Dec 2019 to the first half of 2020. Here’s what we found insightful:

Parcel volumes surged by 38% during the Christmas season

The estimated average spending during Christmas in 2019 for Europeans was 461 euros. The estimated expenditure for people in Germany specifically exceeded this average of 488 euros. A poll conducted by British consulting firm Ernst & Young also suggested that the Germans were generous with their spending, estimating total Christmas spending at $20 billion.

According to our data, 61% of parcels delivered to parcel lockers are picked up within 24 hours, This outperforms regular deliveries which can take up to 1.3 business days. We are passionate about the utility of parcel lockers for end-consumers and logistics carriers. With these parcel lockers in place, carriers can fulfill multiple orders on a single trip, making it more cost-effective. On the other hand, consumers can collect their orders at their own convenience. This provides more flexibility and control for consumers to pick up at stations closest to them, whilst improving delivery success rates.