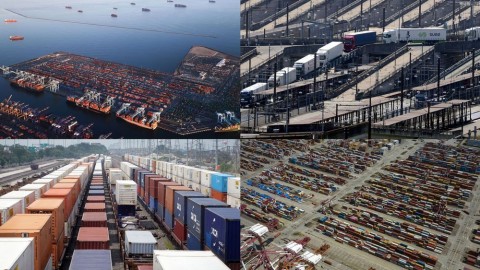 The pandemic has caused great damage to the global supply chain since last year. The hopes of the supply chain jam getting cleared out by now did not happen. It has only gotten much worse, which puts the holiday season at risk.

As if factory closures were not depressing enough, it turns out that was only the beginning. From Suez Canal blockage, labor shortage, to the spike in transportation cost, this chain of “black swan” events made restarting extremely hard. According to Lee Klaskow, a logistics analyst for Bloomberg Intelligence, the supply chain has never had the opportunity to get back to normal.

Retailers have tried their best to secure goods for Christmas, however, only bigger retailers would be able to afford these options. MGA’s Larian is willing to pay an extra $20,000 per shipping container. To ensure goods can reach in time, American Eagle Outfitters switched to air freight. Academy Sports and Outdoors have prepared in advance, imported goods earlier, moved shipments away from the west coast to less crowded ports and booked cargo capacity earlier in the year. All of these, however, only help them keep an adequate level of inventory.

This scarcity will significantly affect customers’ choices. There will not be many choices to make this year since the range of goods will depend heavily on factors like the size or its manufacturer.

Since shipping fees have severely increased, shipping bigger and lower valued items does not make as much sense economically. For example, iPhones are small and high-priced, so these will be ideal goods to ship or even air freight.

Instead of hard goods, customers might opt for experiences and services vouchers as gifts. The situation will also force Americans to shop sooner for holidays, instead of waiting for sales in later days. In general, it will be a hard season with many changes in shopping habits:

“Consumers might see news about port backups, but that won’t hit home until they try to buy the toy of the year and can’t get it. That’s when they’ll hit crisis mode.” Jennifer Bartashus, an analyst for Bloomberg Intelligence stated.

Source: Christmas at Risk as Supply Chain ‘Disaster’ Only Gets Worse