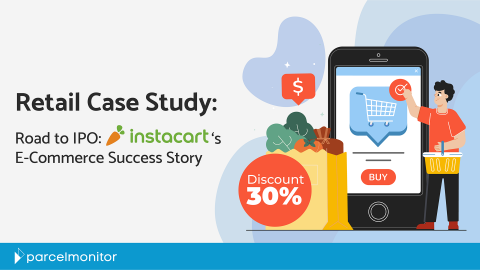 Founded in 2012, San Francisco-based Instacart is fast becoming a household name across the United States. The company focuses on providing grocery delivery across 8,000 store locations in the US and Canada, partnering with more than 500 retailers including Walmart and Sephora.

Many now recognize Instacart as the second largest US-based unicorn expecting an IPO within this year. However, what is often missed out is the company’s rocky journey to success — a path paved with initial losses that had cast many uncertainties over Instacart’s destiny. Read on to learn more about Instacart’s journey to its current successes!

While Instacart has been making headlines for its successes amidst the pandemic, the grocery delivery and pick-up service was in the red prior to 2020. Instacart recorded sales losses of as much as $15 per order in 2015 and more than $2 on every order at the beginning of 2019, amounting to a massive $25 million loss per month in 2019.

With the then-seven-year-old company said to have made a $300 million loss throughout 2019, the future of Instacart looked uncertain at best. In fact, the company had only turned a profit in April 2020 after eight years of losses.

Nevertheless, Instacart was still able to raise $220 million at a valuation of $2 billion in 2015 before it was profitable. Yet, there were doubts about their potential to succeed given Instacart’s lack of competitive edge in the grocery service space then. Even with a fresh pump of investment, Instacart had no clear differentiator from other longstanding players such as Peapod, which has been around since 1984, as well as newer entrants like Amazon Fresh.

Doubts further mounted when one of Instacart’s largest grocery retailers, Whole Foods, was acquired by Amazon in 2017. This subsequently led to the premature ending of Instacart’s exclusive five-year partnership with Whole Foods in 2018, dealing a further blow to Instacart’s operations by disallowing them from making deliveries for Whole Foods.

From 2020: Big Winnings During the COVID-19 Pandemic

Despite Instacart’s initial losses and doubts surrounding the company, the company saw a remarkable turnaround during the pandemic. With stay-home orders in place to curb the spread of the virus in the U.S., e-commerce became the safest way for consumers to purchase their essential items and have them delivered to their doorstep. For instance, US e-commerce sales grew a whopping 44% last year totalling to $860 billion spent online.

Instacart was the go-to option for people to shop for their essential groceries from the safety of their own homes during the lockdown. To meet the surging demand for grocery deliveries, Instacart hired 300,000 workers to their fleet of “shoppers” in North America, doubling the number of full-time shoppers.

Delivering more food than Walmart, America’s largest grocer, Instacart’s 500,000 shoppers were found across over 45,000 stores across America and Canada with revenue hitting $1.5 billion.

Consumers were purchasing more as well; despite Instacart being in the red as recently as 2019, the company had grossed more than $3 per order by June 2020 thanks to the pandemic. Instacart also experienced three consecutive quarters of positive cash flow — a first for the company that was used to making losses on every order.

The wave of success during the pandemic led to Instacart being valued at 17.7 billion in October 2020, doubling its valuation. The e-commerce grocer doubled yet again in 2021 at a valuation of 39 billion, making it the second largest U.S.-based unicorn.

As the third largest grocery platform after Walmart and Target, Instacart is now preparing for a public listing in 2021 after its breakthrough during the pandemic.

2021 and Beyond: What’s in Store for Instacart?

With the possibility of an IPO in the works, Instacart’s future looks promising. Even with lockdowns lifted, on-demand grocery shopping services provided by companies like Instacart are here to stay due to the speed and convenience it offers. On top of that, consumer habits have changed over the pandemic, making online grocery shopping a persistent and lasting trend in a post-pandemic world.

Indeed, as 77% of consumers who made grocery purchases online during the pandemic are inclined to do so again in the future, we are only witnessing the beginnings of Instacart’s success story. We are very much looking forward to Instacart’s growth in 2021 and the years to come!