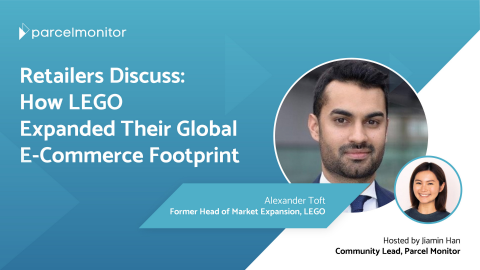 In our latest Fireside Chat, we sat down with Alexander Toft who was formerly the Head of Market Expansion at LEGO. In this discussion, Alex shares about his role at LEGO, LEGO’s go-to market strategy across the world, as well as cross-border e-commerce strategies.

At LEGO, Alex’s work was focused on launching and scaling LEGO in markets where the company was under penetrated, with an emphasis on emerging markets such as the Middle East, Africa and South Asia.

Topics covered in the discussion include:

Key Takeaway #1: Market opportunity and ease of execution are important factors to consider when expanding to new markets

During Alex’s time at LEGO, he shared that when identifying new markets for geo-expansion, the company looks at two factors: market opportunity and the ease of execution.

In terms of market opportunity, LEGO focuses on bigger markets that have more of their core consumer base: children. Besides targeting larger markets, LEGO also considers how affordable their products are in various markets given how LEGO tends to be on the pricier side.

When it comes to the ease of execution, LEGO considers the operating environment in various markets, such as regulations, logistics infrastructure, and how easy it is for them to do business. Additionally, LEGO also looks into the distribution channels that are available to them. This is because as a premium brand, it is crucial for them to have the right quality of channels available to them, regardless of whether they are online or offline channels. If such channels are non-existent, they then consider how easy it might be to set up their own.

Key Takeaway #2: LEGO remained relevant by amplifying its core values of creativity and play throughout its different mediums

LEGO was founded in 1932 and even after so many years, the company still remains a crowd favourite across all age groups with its constant innovation and expansion into new mediums such as movies and video games.

On this note, Alex shares a few factors as to how LEGO has remained relevant over almost 90 years:

Having a phenomenal product since its founding

“I think in terms of remaining a crowd favorite, probably the biggest single factor is that we are just blessed with an amazing product. I think the LEGO ‘System of Play‘ is a very enduring kind of system… It’s a very enduring one and has quite a strong universal appeal,” shares Alex.

According to Godtfred Kirk Christiansen, the son of LEGO founder Ole Kirk Christiansen who took over as Managing Director in 1957 and later became the sole owner of the company, he explains, “The LEGO System means that: all elements fit together, can be used in multiple ways, can be built together. This means that bricks bought years ago will fit perfectly with bricks bought in the future… It means that a LEGO element not only has instant value, but will keep its value always… We will always make sure that all bricks – from yesterday, today and tomorrow – fit together.”

This LEGO System of Play that Alex highlighted helps to explain the company’s longevity and strong universal appeal, where its old products are able to seamlessly mesh with its new iterations.

During the Fireside Chat, Alex shared that the creative iterations on LEGO’s System of Play has kept the company fresh and relevant. Even though LEGO has experimented with combining digital and physical play, they have remained grounded in the core LEGO values which has helped them stay relevant through time.

While LEGO has ventured out to contemporary mediums such as video games, movies, digital platforms and television shows, they have made use of these new mediums to amplify the core LEGO values of play and creativity and also “bring kids back to the primarily physical play experience.”

By not losing sight of their phenomenal product and ensuring that it remains the core of their business, LEGO has been able to reap success over the years. Alex emphasizes that while it is important to experiment with new mediums, it has also been crucial for LEGO to have a strong focus on the core physical experience of play and its core product.

Lastly, LEGO has also adapted well to external circumstances by investing in e-commerce and their own direct-to-consumer channels, allowing the company to be well-positioned during the pandemic.

In spite of pandemics which led to the closure of retail stores, LEGO still saw a 21% increase in consumer sales, with its investments in e-commerce being a significant factor for this jump in sales.

For the full discussion, check out the video below. You wouldn’t want to miss it!

(We would like to thank Mr Alexander Toft for taking the time to answer our questions. You can connect with him on LinkedIn here and keep up to date with his upcoming DTC venture.)