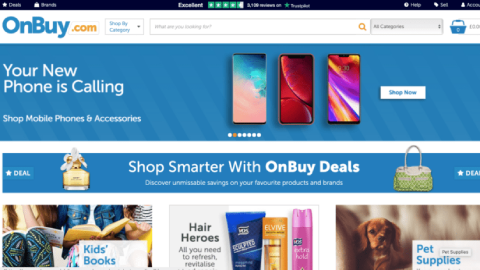 After securing 5.5 million euros in a Series A funding round last June, UK-based online marketplace OnBuy is setting its eyes on launching in over 140 countries and achieving unicorn status by 2023.

With the pandemic-fuelled e-commerce boom, OnBuy managed to achieve its third consecutive year of over 600% growth. The marketplace is currently valued at an estimated 200 million euros since its launch four years ago.

“Securing unicorn status is not an easy feat, but our success so far proves it’s well within our grasp”, said Cas Paton, Founder and CEO.

In 2020, OnBuy saw 600 sellers onboarding every month. Its CEO is confident that OnBuy is on its right path to securing its unicorn status and expanding even further.

“Especially as we are already underway with our global scale up that will take OnBuy into over 140 countries before year-end 2023.”

“We have grown quickly over the last four years, but 2020 has skyrocketed our expansion and we are now growing at a phenomenal rate. With over 600 sellers onboarded each month last year, we’re on track to claim around five percent of the UK ecommerce market in the next three years. We’re aiming for one percent of the global ecommerce market in the next five years alongside that.”