Levity: What do Australians Think About ‘Buy now, pay later’? 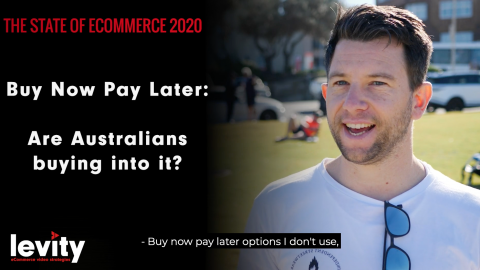 “I think [‘buy now, pay later’] definitely makes you spend more because you don’t have that money and it’s actually allowing you to get it without the money.”

Are you familiar with the concept of ‘Buy now, pay later’? There are many buy-now-pay-later providers in Australia right now: for example Afterpay, Zip, Openpay, Humm, Payright, Splitit, and Klarna. These providers allow consumers to spread the cost of an item over time interest-free.

This payment method has been increasing in popularity from 2018 to 2020, with over 60% of Australians already aware of this service and nearly 2 million Australians having used Afterpay or ZipPay in 2019. Afterpay has also been garnering a lot of attention; especially with their recent expansion into Canada along with brands like AmericanEagle, Huda Beauty, FragranceX.com, Herschel Supply Co., and Nixon.

Michael Langdon, Director of Levity, recently did a video interview on what Australians think about the buy-now-pay-later payment method. Check out the video below to find out more!

Michael Langdon is a Director at Levity and bestselling author of Welcome to the Age of Emotion: How to attract and connect with customers using video.

Levity is an award-winning E-Commerce video strategy house which helps E-Commerce brands sell faster through streamlined video productions at scale. Their videos have amassed over 20 million views and been featured in The Huffington Post and Mashable.