Impact of COVID on Europe’s Logistics 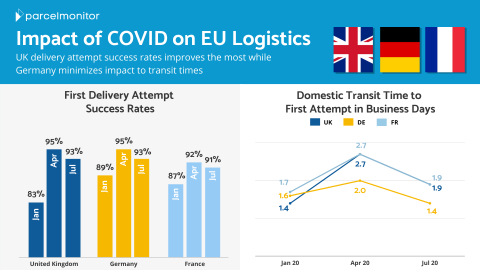 After the UK, Germany, and France respectively announced national lockdowns earlier this year, like the rest of the world, consumers began shifting towards online shopping. This was further boosted by the closure of physical retail stores which encouraged some consumers to start shopping online.

The pandemic has created a boom in the UK’s e-commerce market, which is expected to generate sales totaling $105 billion this year. E-commerce in Germany and France is also expected to reach $92.33 billion and $77.27 billion in sales in 2020 respectively.

This week, we looked into how these countries have fared amid the pandemic by comparing key delivery performance metrics in the months of January, April, and July: