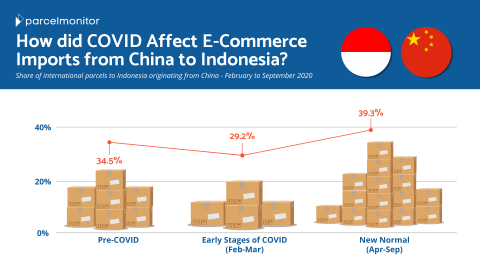 In April, Indonesia announced that the capital city of Jakarta will go on a partial lockdown. However, as COVID-19 cases increased, officials expanded the partial lockdown to areas around Jakarta; affecting close to 34 million people.

Lockdown measures shifted consumers online to purchase their daily necessities and essentials. In the first quarter of 2020, e-commerce marketplace Shopee recorded an increase in sales in Indonesia by 120%. The marketplace hosts sellers from all over the world, including China, also known as one of the largest exporters in the world. In fact, China is the largest source of international shipments coming into Indonesia – 51% of parcels originated from China in 2019.

On the other hand, the escalating situation in China during the height of the pandemic – February and March – had caused major supply chain and trade disruptions.

How has COVID-19 affected the volume of shipments coming from China? Our in-house data team compared the number of parcels shipped from China to Indonesia from February to March 2020 against April to September 2020 to answer this question.

Towards the end of January, China implemented a domestic lockdown as the virus swept the country. As China is one of the largest exporters in the world, the lockdown affected the supply chain and logistics industry globally with many exports delayed or canceled.

In March, China reported a 6.6% decrease in exports compared to a year ago due to the pandemic outbreak.

With a large portion of international shipments coming from China, the global supply chain shocks also affected Indonesia. Indeed, our data shows that there was a 5.3% decrease in the proportion of e-commerce shipments from China as compared to the period before the pandemic outbreak.

In April, China ended its domestic lockdown and reopened its economy, resulting in a surge of exports in July by 7.2%.

Based on our findings, the volume of shipments coming in from China into Indonesia quickly recovered after China lifted its lockdown; even surpassing pre-COVID levels by 10.1%. Despite the spike in e-commerce demand from lockdown measures, logistics carriers have quickly adjusted to these new circumstances. This is consistent with what we observed in previous Southeast Asia studies, where average transit times seem to move towards normalization from Q2 this year.

Besides encouraging more consumers to shop online, the pandemic has also changed consumer behaviors around the world. In Indonesia, shopping online for household essentials is now the norm as Indonesians adapt to the ‘new normal’ of living life indoors.