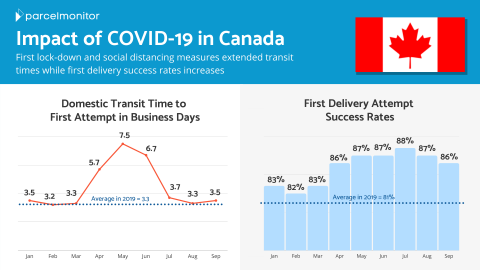 This week, we looked into the effects of COVID-19 on Canada’s logistics performance namely transit time to first delivery attempt and the success rate of said delivery attempt for domestic parcels over the past 10 months.

Here’s what we found:

This increase in average transit time was likely attributed to the pandemic-driven e-commerce spike, and the capacity crunch logistics carriers were experiencing during the lockdown.

“We saw parcel levels that we would normally only see around Christmas — we would deliver up to two-million parcels in one day — that’s what we would see around Cyber Monday, Black Friday week sales,” says Jon Hamilton, spokesperson for Canada Post.

Amid the spike in e-commerce deliveries, the safety measures implemented due to COVID-19 had also set the logistics industry up for a challenge. Many customers were affected by delivery delays thanks to social distancing and grounded flights measures logistics carriers had to take to ensure safe operations. In response, Canada Post had advised its customers to remain patient while waiting for their parcels.

In May and June, we see positive signs of transit times approaching normalization. Logistics carriers seemed to have adapted relatively well to these new circumstances, and consumers appear to be shifting back to shopping in-stores.

Notably, retail e-commerce sales in June were lesser than in May as more physical stores and non-essential businesses opened up. Overall retail sales, however, have grown from April and even reaching pre-pandemic levels.