H2 2020: The State of E-Commerce in the Netherlands 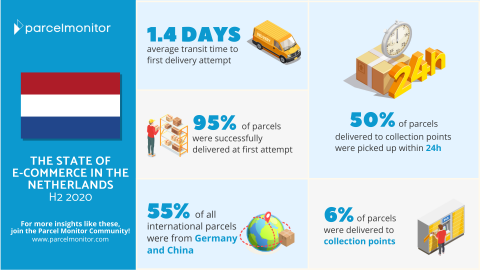 The Netherlands is the 16th largest e-commerce market with a revenue of US$19 billion in 2020. The pandemic-driven shift in consumer behavior accelerated e-commerce around the world, including the Netherlands. Indeed, we observed that the Netherlands experienced a spike in digital commerce revenue by 46% in Q2 2020.

We have evaluated the State of E-Commerce in the US, Australia, and Southeast Asian countries like Indonesia, Thailand,  Malaysia, and Singapore for the second half of 2020. This time round, we are taking it up to Europe with the Netherlands.

The first wave of the pandemic pushed the Dutch government to enforce stricter social distancing measures. With the country gradually opening up from June 2020, how has that impacted its state of e-commerce?

Parcels in the Netherlands take an average of 1.4 days before first delivery attempt

In comparison with other European countries like Germany (1.5 days), the UK (2.2 days), France (1.8 days), and Sweden (2.1 days), parcels in the Netherlands seem to have the shortest transit time on average.

One of the biggest e-commerce postal companies in the Netherlands, PostNL, reported delivering over 337 million packages last year — which is a whopping 54 million more packages than in 2019! The Dutch retail sector also recorded a 55.5% increase in online sales in November 2020. It is evident through the relatively short transit times that the Netherlands was coping well with this growth in parcel volume as compared to its European counterparts.

Despite the decline in the number of cases within the country, the Netherlands was not able to escape the second wave of the pandemic last year. The Dutch government had to tighten the lockdown restrictions in order to contain the spread of the virus. These restrictions pushed the Dutch to stay and work from home, which has likely led to the high rates of successful first attempt deliveries.

6% of parcels were delivered to collection points

A survey by Statista found that four in five Dutch consumers prefer home delivery over other alternatives. This is further emphasized by our findings where only 6% of parcels were delivered to collection points.

As of 2020, the Netherlands has only 122 parcel lockers across the country. The further restrictions due to the second wave certainly did not help with the usage of collection points. Most consumers preferred home delivery over heading out to collect their parcels.

Will the Netherlands eventually pick up the usage of collection points with more retailers in Europe offering delivery alternatives? How will the ‘new normal’ affect the state of e-commerce in the Netherlands?