E-Commerce Deliveries From China Across The World 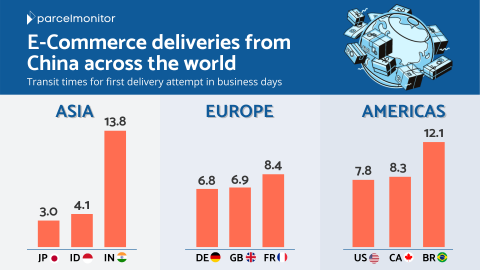 In our previous e-commerce studies done in Southeast Asia, China consistently appeared in the top 3 countries for international shipments. This should come as no surprise as China has been the world’s largest exporter and trading nation since 2014. It overtook Germany as the largest exporter in 2009, and surpassed the US as the world’s largest trading nation in 2013.

As China remains one of the highest exporters in the world, with many retailers and merchants seeking their supplies from there (e.g. Alixpress, Alibaba), understanding transit times plays an important role in logistics planning if your business ships worldwide.

For this study, we selected 3 countries with large economies from each region:

More than half of these countries were China’s top 10 partners in terms of export sales in 2019.

To measure delivery performance, we examined the average transit times for first delivery attempts in business days for international parcels in 2019.

As many variables influence international transit time, we should consider our findings within  these factors:

Amongst the 9 countries examined, Chinese shipments to Japan had the shortest average transit time at 3 days for first delivery attempts. Shipments to Germany and the US were the quickest in their regions at 6.8 and 7.8 days respectively.

With the closest proximity to China, many would assume that shipments entering countries in Asia would have the shortest transit time.

However, our findings show otherwise. Shipments from China traveling to India had the longest average transit time of 13.8 days – over 5 times longer in duration than to Japan.

A 2018 report by Deloitte found that India was facing multiple challenges in its logistics performance. One of them was infrastructure deficiency; which led to high and inconsistent cargo transit time amongst others.

It is however heartening to know that India is working towards building a more robust logistics network in the country. The government is dedicated to improving the functionalities of India’s logistics and infrastructure. With a focus on bettering the supply chain management, infrastructure measures have been implemented to support logistics players.

The average transit times of Chinese shipments to the European countries ranged between 6 to 9 business days, with shipments to France taking the longest time at 8.4 days. According to the Logistics Performance Index (LPI) comparing Germany and France in 2018, Germany had a score of 4.31 in logistics competence whilst France scored 3.84.

Perhaps one of the reasons for this difference could be the relative efficiency of logistics services amongst these countries.

Chinese shipments to countries in the Americas had a longer transit time on average; being located the furthest from China. Amongst the 3 countries, shipments to Brazil took the longest time at 12.1 days.

Again, this could be attributed to several factors. For instance, the relative duration of the customs clearance process and the efficiency of logistics services.

In a comparison done between Brazil and the US in 2018, Brazil took a lead time of 5 days for imports through the port or airport supply chain whilst the US took only 2 days despite being similar in land area. Data from the World Bank also showed that Brazil’s “logistics competence” score was 2.88; which was significantly lower than the US which had a score of 3.51.

How will these trends develop in the latter half of 2020?

With the disruptions to supply chain and postal services caused by COVID-19, we can expect the average transit times in 2020 to differ from our findings above. For instance, Chinese exports saw a sharp fall in the early parts of 2020 due to supply constraints from factories being shut down nationwide. As export economies open up and lockdowns ease globally in the second half of 2020, we’re looking forward to seeing how these trends develop.