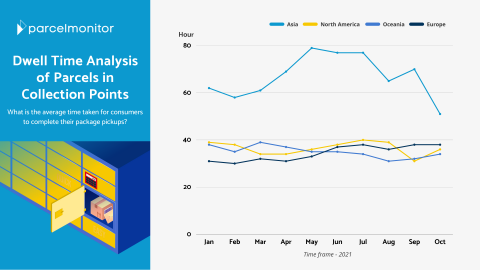 Can you believe it? Almost two years have passed since the start of the pandemic, and a great deal has changed. In parallel to the unprecedented growth in e-commerce, 2020 saw a surge in popularity of alternative delivery methods. Parcel collection points, in particular, have gained traction as more and more people are starting to discover their benefits.

In this report, we take a deeper look at consumer behavior with regard to the use of collection points. Can you guess the region with the shortest package dwell time? Or the one with the highest percentage of packages picked up by the 48th hour?

Here are your answers:

In terms of package pickups, Oceania led the pack with 63.3% of packages being collected within 24 hours. The average dwell time of parcels in Oceania was also one of the lowest in the world at 35 hours. Although pick-up and drop-off (PUDO) points were only recently introduced in countries like New Zealand and Fiji, consumers in this region displayed a high preference for collection points (CPs). This may be due to their deep understanding of the environmental impact of traditional doorstep delivery; after all, New Zealand was named one of the most environmentally friendly countries, with the highest percentage of protected terrestrial and marine areas in the world.

Australia, on the other hand, is one of the fastest-growing PUDO markets with approximately 8000 PUDO locations as of July 2020; the number is expected to increase in the coming years due to the partnerships between local retailers and courier companies. As such, it would make sense for these PUDO points to be conveniently located in the residential areas, thus allowing shoppers to retrieve their packages in a prompt manner.

Based on our findings, Asian customers needed more time to pick up their packages from parcel collection points. In contrast to the 34-37 hour range observed for other regions, the dwell time for packages in Asia stood at 66.9 hours. Package collection points are a relatively new trend in most Asian markets, making them incomparable to their Western counterparts like France and Poland that have set up extensive parcel networks as early as 2019.

In addition, the lack of basic logistics infrastructure in rural parts of Asia also serves as a major roadblock for establishing successful PUDO systems. While this has not been much of a concern for smaller, more developed nations such as Singapore, the region’s overall progress has been limited for this very reason. Therefore, it is imperative for governments to start prioritizing the development of well-integrated logistics networks in order to increase the ease and accessibility of parcel collection points throughout various countries.

Despite the differences in penetration levels around the world, package collection points are proving to be a valuable delivery option for consumers everywhere. Parcel Monitor data shows that more than 65% of parcels worldwide are collected within 48 hours, with Oceania having the highest rate at 78.4% followed by North America (77.4%) and Europe (75.6%). This is no surprise considering the fact that the United States has over 70,000 parcel carriers, whereas Europe has seen a 40% growth in PUDO points since mid-2019.

Even in the case of Asia, about 69% of package pickups were completed by the 48th hour. It does seem like an increasing number of countries are becoming more open to the PUDO concept given the multiple advantages it offers: more successful deliveries, more efficient delivery rounds, less fuel consumption per delivery, etc. Ninjavan, for instance, has expanded its network to cover six Southeast Asian countries namely, Singapore, Malaysia, Indonesia, Thailand, Vietnam and the Philippines.

The Roadmap for the Future of Last Mile Delivery

As much as the future of last-mile delivery holds ample opportunities, it is also filled with many uncertainties. While it is clear that package collection points are now an essential part of last mile offerings, are they here to stay for a long time? Or are they merely a hype that will soon die down? We cannot wait to find out!