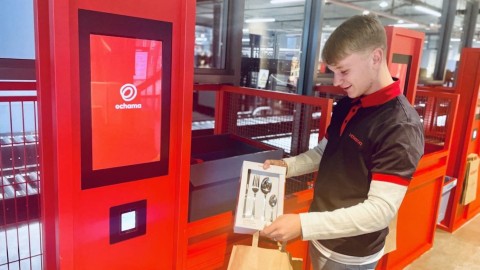 China’s retail giant JD.com has opened two “robotic shops” branded Ochama in the Netherlands. The stores are located in the cities of Leiden and Rotterdam, marking the company’s first foray into Europe. Robots will perform all operations within these stores, including preparation and delivery of packages.

Ochama comprises a wide array of products ranging from furniture to cosmetics. Customers can place orders through the mobile app or by going directly to the stores; they scan their barcodes upon arrival and their items will then be carried to them via a conveyor belt.

This move signals JD.com’s intent to branch out beyond China, which could pose a threat to its competitor Amazon. Meanwhile, the US player has recently launched its cashier-less grocery stores in the US and UK. In the past, JD.com’s revenue was largely derived from China’s market but given their recent efforts to expand internationally, this is bound to change.

According to Xin Lijun, the Chief Executive of JD’s retail business, the company is conducting “further strategic analysis in Vietnam and Europe” as potential venues to expand in next. At present, JD.com operates an international shopping site called Joybuy.com, has a joint e-commerce venture in Thailand, and is also the largest shareholder of Vietnamese e-commerce platform Tiki.